Former India captain Sourav Ganguly is all set to take over as BCCI President soon. Addressing a press conference after filing his nomination

Former India captain Sourav Ganguly is all set to take over as BCCI President soon. Addressing a press conference after filing his nomination, Ganguly said that although Indian cricket is in a healthy state under current skipper Virat Kohli, he wants the team to win the big tournaments.

“India are a good team. The only issue Virat Kohli needs to address is that we have not won the last seven major tournaments. But they play well in big tournaments, except the semifinals and the final. Hopefully, Virat can change it around. He is a champion player,” Ganguly said.

Ganguly also played down any comparisons between him and the late Jagmohan Dalmiya, one of the most successful BCCI presidents, who was also from Kolkata. “He achieved whatever was there to achieve as an administrator. I will consider myself successful even if I manage to achieve 50%,” Ganguly went on to add.

One of India’s most successful captains, Ganguly also denied that he was a victim of politics during his playing days. On being constantly probed, he added, “Only once or twice,”, but went on to say, “Only three Indian cricketers have played more than 300 ODIs and 100 Test matches. They are Sachin Tendulkar, Rahul Dravid and yours truly. This would have been impossible had I faced politics or injustice.”

The BCCI President-in-waiting also had a word of advice for Wriddhiman Saha. Ganguly stated that while Saha has been brilliant behind the stumps, he is not scoring enough runs. “There is no question on his wicketkeeping skills but he has to score runs if he has to play 100 matches. There is one more match in the South Africa series and he still has a chance to score a century,” opined Ganguly.

As BCCI President, Ganguly would operate from both Kolkata and Mumbai. While Ganguly will be the President, Jay Shah, son of Union Home Minister, Amit Shah, will be the new BCCI Secretary and Anurag Thakur’s brother Arun Dhumal will be the board's new Treasurer. 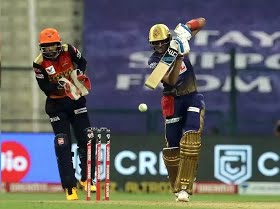 Sep 26, 2020: The Kolkata Knight Riders put on a professional show as Sunrisers Hyderabad looked clueless for most part of the match. SRH’s overdependence on their openers was visible again as they finished at a subpar score of 142, and KKR opener Shubhman Gill played a breezy 70 to achieve the target without much fuss.