We missed an opportunity to beat one of the best sides: Gulbadin Naib

Enter Blog Content here.Afghanistan captain Gulbadin Naib said he was disappointed over his team's failure to get over the mark against India.

Enter Blog Content here.Afghanistan captain Gulbadin Naib said he was disappointed over his team's failure to get over the mark against India. However, he added that the team was not heartbroken after India got out of jail to beat them by 11 runs at Southampton on Saturday.

"We are sad because we have a chance to beat this kind of team. In the World Cup, it's a big achievement for any team. But the big teams, they don't give you a single chance. Today we missed an opportunity to win, to beat India, one of the best sides," Naib said after the game.

It was Afghanistan's sixth loss in the tournament but their most competitive performance. While most of the bowlers stood up and delivered on a pitch that offered assistance, it was Mohammad Nabi's all-round effort that almost sank India. Nabi took two wickets and then scored a fifty as the Afghans gave India a real scare before Mohammed Shami's last-over hat-trick sealed the deal.

"Today Nabi showed the skills, how he's one of the best players of Afghanistan and also in the world. Actually, we planned that we're going to take the match at the end to the last five overs. So Nabi played really well according to the plan," he said. 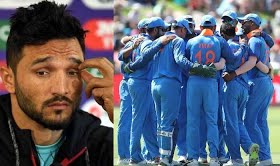 "When we played the first four games, we lost really badly, and then we played against England and now India - strong sides and also they are the favorites of the tournament. So I think we're now getting better and better day by day," Naib added.

Naib admitted the team should have batted better to support their bowlers. "When we chase this kind of total like 220, 250, one or two of our middle order should go to 50 or 80. Thirty, 20 runs is not enough. The score is changeable, but I think we didn't take our responsibilities, especially on the batting side," the skipper candidly admitted.

Naib, however, admitted that Afghanistan is taking a lot of positives from the World Cup as they are learning with each game.