Afghanistan defeated Zimbabwe by 5 runs in a thrill encounter

Afghanistan hold their nerves to defend 187 by a margin of 5 runs in Sharjah and take 1-0 lead in the two match T20 series.

Afghanistan hold their nerves to defend 187 by a margin of 5 runs in Sharjah and take 1-0 lead in the two match T20 series. Both teams were in the game till the last ball and then Gulabdin Nabi took a fine low catch to snatch the game from Zimbabwe.

Afghanistan had won the toss and elected to bat first. Their openers Mohammad Shehzad and Usman Ghani started off the inning in a blitzing fashion. Especially, Shehzad who punished almost everything which was there to be hit and contributed with 17-ball 33-run, which include three big sixes. But Cremer bowled Shehzed and broke 63 runs partnership which was taking the game away from Zimbabwe as the partnership was scoring at more than ten runs per over. This wicket opened the game for the visitors and they kept taking crucial wickets at regular juncture of the game until Mohammad Nabi and Gulabdin Nabi joined hands for the fifth wicket. Nabi pair struck many sixes and added runs quickly which helped Afghanistan to post an imposing total. The pair added 52 runs off just 27 balls. 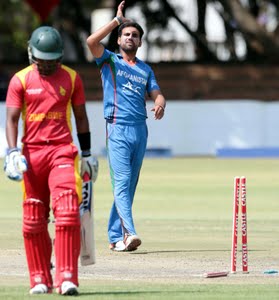 In reply, Zimbabwe made a horrible start. Moor was caught Najibullah Zardan off Daulat Zardan for 2 in the first over. Then Masakadza and Chamu Chibhabha batted well and maintained the required run rate. Thought both batsmen couldn’t carry on for long time but the batsmen who follow them scored quickly despite losing wickets. Both teams had a poor day in the field which helped batsmen to score more and game more interesting. But Waller and Sikandar Raza added 56 runs for the fifth wicket and controlled the damage but the partnership was little slow which kept Zimbabwe out of the game for some extent. When Raza got out on the fifth ball of 18th over, 37 runs were still needed off 13 deliveries which is a big task for the lower order batsmen. But some poor bowling and fielding from the hosts, Zimbabwe kept threatening Afghanistan and remained in the game till the last ball.

Man of the Match: Gulabdin Nabi