India whitewashed Sri Lanka in the five-match series at home with great ease. Here's a look at some of the top performers in the series.

India whitewashed Sri Lanka in the five-match series at home with great ease. Here's a look at some of the top performers in the series.

Virat Kohli: This has been an unforgettable series for Kohli. In the absence of MS Dhoni, he was leading the side. Although, he did not need to do much as leader, the 5-0 scorecard will give him a lot of confidence. With the bat as well, Kohli was back to his usual best. In five games, he scored 329 runs at an average of 82 and a strike rate of 104. Kohli has been consistent throughout the series, scoring one hundred and two fifties, with the match-winning 139 at Ranchi, which sealed the whitewash in India's favour. Hopefully, we will see a different Kohli in Australia as compared to England. 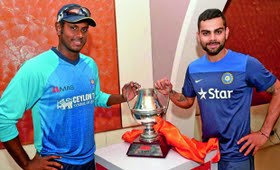 Angelo Mathews In a series where most others failed, the Sri Lankan skipper stood out for his wonderful batting, and highly consistent one at that. He has identical figures to the opposing skipper Kohli. Mathews also scored 329 runs in the series, but he finished with a higher average of 113 since he was unbeaten twice in the series. Incidentally, while Mathews had a strike rate of 102, he also hit one hundred and two fifties in the series. Like, Kohli he had the same highest score of 139 not out, which came in the same match.

Shikhar Dhawan: This series mattered more to the Indian opener than most other players, and he performed exceedingly well, although he featured in only three matches in the series, after which he was rested. Dhawan ended the series with 283 runs at an average of 94 and a strike rate of 106 with one hundred and two fifties. His highest score in the series was 113. Dhawan had returned to form after a long time. So, one must question the logic of him being rested for the last two games.

Rohit Sharma: The exit of Dhawan marked the entry of Rohit Sharma as his replacement opener. And, what a comeback it was for Rohit after a frustrating injury lay-off. The story of the series for him was all about that one match at Kolkata in which he blasted that record-breaking 264, with 33 fours, finishing the series at an average of 136 and a strike rate of 147.

Ambati Rayudu: This could prove to be the watershed moment for Rayudu. He had an impressive series, scoring 250 runs at an average of 62 and a strike rate of 91. He hit one hundred and one fifty in the series, his highest score of 121 not out, which was also his maiden one-day hundred.

Akshar Patel: The left-arm spinner had a memorable series. In five matches, he claimed 11 wickets at an average of 18 and an economy rate of 4.60 along with a strike rate of 23.5. His best bowling figures in an innings were 3 for 40.

Umesh Yadav: The fast bowler impressed with his pace and skills. In four matches, he claimed 10 wickets at an average of 16.9 and a strike rate of 20. His economy rate in the series was a little above 5, and he had a best of 4 for 53.

--By A Cricket Analyst