Maybe in the last game or two we might give him a chance: Matthew Mott on Jos Buttler

England’s white ball coach Matthew Mott has hinted that captain and keeper-batter Jos Buttler could take part in the last two T20Is of the ongoing seven-match series against Pakistan. Keeping the upcoming T20 World Cup in mind, the visitors haven’t risked Buttler yet in the first four matches of the series as he continues to recovers from a calf strain.

The seven-match series in currently tied 2-2, with England and Pakistan winning alternate games. In the fourth match at the National Stadium in Karachi on Sunday, September 25, the Englishmen faltered in a chase of 167, going down by three runs despite Liam Dawson’s 17-ball 34.

At a press conference after Pakistan’s win in the fourth match, Mott opened up on the Buttler situation. He said, "With regard to Jos, he's still a while off, he's not a player we want to take a risk on at this stage, so close to the World Cup, and it was a reasonably significant injury that he had.” 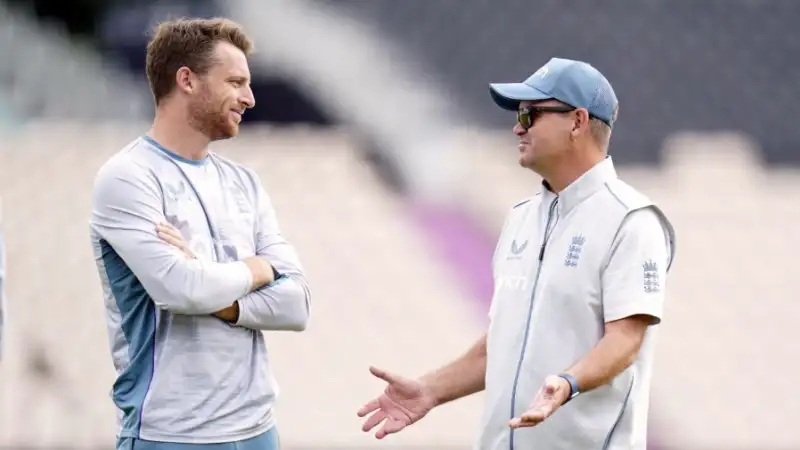 "So, he's champing at the bit for a game, but we'll just try and see how we go and maybe in the last game or two we might give him a chance," Mott added.

The series has been closely fought so far, with Pakistan and England taking turns to experience glory. The visitors would have fancied their chances in chase of 167 in the previous match. However, they slipped to 57 for 4. Despite decent efforts from Ben Duckett (33), Harry Brook (34), stand-in skipper Moeen Ali (29) and an unexpected cameo from Dawson, England failed to get over the line.

Analyzing the defeat, Mott said, "Losing wickets in the powerplay put us on the back foot, it took a really good partnership to get us back in it. Liam's knock was special. It took everyone by surprise, we didn't think in our wildest dreams we'd get in that position. It just shows in T20 cricket you've never got it done."

Pakistan’s bowlers did a terrific job to defend a below-par total on Sunday as Haris Rauf and Mohammad Nawaz claimed three wickets each, while Mohammad Hasnain picked up two, though he was a bit expensive. Earlier, Mohammad Rizwan anchored Pakistan’s innings with 88 off 67 balls.