In-form Team India batter Suryakumar Yadav scored a spectacular 111 off 51 balls as the Men in Blue beat New Zealand by 65 runs in the second T20I of the three-match series in Mount Maunganui on Sunday, November 20.

The Men in Blue were sent into bat after losing the toss and Suryakumar once again stood up for the team, hammering 11 fours and seven sixes. Thanks to his knock, the visitors ended up posting an impressive total of 191 for 6. SKY reached 50 off 32 balls and then went into overdrive mode, needing only 17 balls to bring up his second fifty.

The 32-year-old’s hundred on Sunday was his second three-figure score in T20Is. The right-handed batter had notched up a century in England in a losing cause earlier this year. The special knock further validated his standing as the top-ranked T20I batter in the world as per the official ICC rankings. 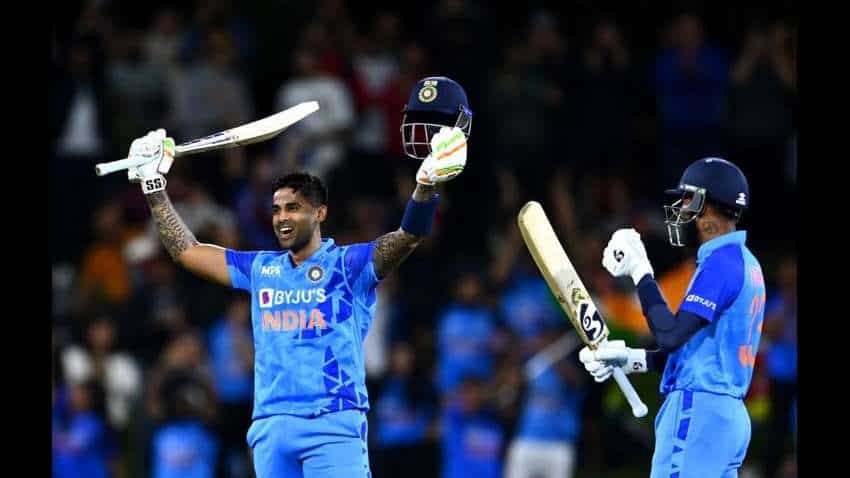 India lost Rishabh Pant for 6 off 13 to Lockie Ferguson, while Ishan Kishan fell to Ish Sodhi for 36 off 31. Shreyas Iyer looked good for his 13 before falling hit wicket to Ferguson. Suryakumar went absolutely berserk in the last five overs to take the batting side to 190. The only reason they could not get to 200 is because Tim Southee got a hat-trick and kept SKY off strike in the last over.

Chasing 192, New Zealand lost Finn Allen to Bhuvneshwar Kumar in the first over. Skipper Kane Williamson (61 off 52) held the innings together, but he was never in attacking mode for most part. India eased to victory, cleaning up New Zealand for 126 in 18.5 overs. Yuzvendra Chahal and Mohammed Siraj got two wickets each, while Deepak Hooda helped himself to four wickets as New Zealand’s tail looked to attack him.

Speaking after the match, man of the match Suryakumar said, “The plan was clear when I went into bat. At the 12th/13th over, we thought about batting deep and getting around 170-175 was a par score. Secret (behind his freak shots) is about the intent and you need to enjoy yourself. It's also about the work you do in the practice sessions. It's a great feeling coming here, having a full game and going 1-0 in the series feels good.”