Axar Patel couldn't wait to get the ball in his hands: Virat Kohli

Following the win, Kohli said that Patel was very keen to play the Test. Kohli was quoted as saying, "He was very keen to step onto the field, and as a left-arm spinner, when you get that kind of a pitch where it is turning square and he bowls so fast, he was just all smiles, he couldn't wait to get the ball in his hands.”

Axar was slated to make his debut in the first Test but was ruled out due to a niggle, and had to be replaced by Shahbaz Nadeem. Kohli added, "Actually, he would have played the first game as well if he didn't have that niggle. Hope he builds it up from here on, and has a very strong couple of games going forward, so he's always in the mix to play Test cricket for India." 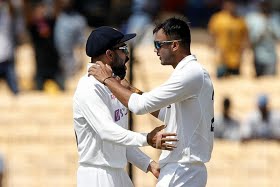 Veteran off-spinner Ashwin, who was named Man of the Match award for his hundred and eight wickets, also applauded Axar for a memorable debut. Ashwin said, "I thought Axar bowled beautifully. Even in the first innings he was pretty good. He got his rewards in the second innings. He didn't look like [he was] nervous. He looked like he was there. It didn't look like he was under pressure. He just turned up like he would turn up for a first-class game and bowl beautifully.”

Ashwin also praised Kuldeep Yadav and added that the wickets he picked should give the latter confidence going ahead. "Sometimes when you are bowling after a long time, to get confidence with an early wicket, is always very important. The moment he got the batsman to drive, he was going to be handful," the 34-year-old explained.

The third Test between India and England will be held in Ahmedabad from February 24. 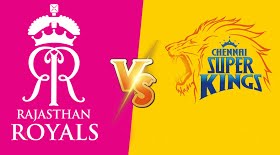 Apr 19, 2021: Chennai Super Kings (CSK) will face Rajasthan Royals (RR) in the 12th match of IPL 2021 at the Wankhede Stadium in Mumbai on Monday. Both CSK and RR have had a similar run in the tournament so far.